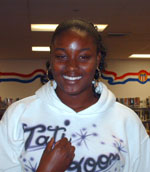 Tatiana Jackson is a very outgoing and positive person.  She is the older of two siblings and says that her main aspiration in life is to be a better person and a good example for her little sister.  Another major goal of hers is to attend college and get a higher education.  Tatiana would like to be the first person in her family to have a doctorate degree.

Tatiana is currently a senior at Miramar High School.  Tatiana is fascinated with mystery and science.  Her dream is to attend a state university and study forensic anthropology. She wants to enjoy the excitement of solving mysteries while helping others.

In the past, Tatiana has been involved in extracurricular activities at school such as volleyball and flag football.  She has also won awards including the Best All-Around Student Award, Young Author Award and Best Overall in Social Studies. In the 2010-2011 school year, Tatiana was crowned Homecoming Princess and won the award for Most School Spirit. Tatiana considers her strengths to be team sports and working with others.

A former student of the Jason Taylor Reading Room, Tatiana was the speaker at the 2009 Jason Taylor Gala and Charity Auction where she represented all of the incoming Jason Taylor Scholars and showed her appreciation for receiving such a great opportunity.