One of the most iconic symbols associated with Pro Football Hall of Fame Enshrinement is the bronze bust that is crafted to memorialize each gridiron legend. In 2017, Jason Taylor was introduced to sculptor, Ben Hammond, who was commissioned to capture the former Miami Dolphins defender’s likeness for its forever football home in Canton, Ohio. 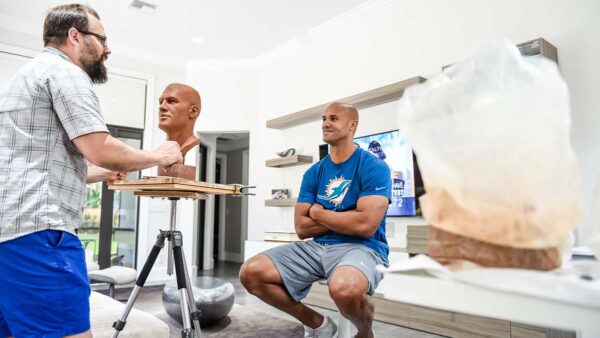 With Taylor set to induct three new members into his Foundation’s Community Hall of Fame, Hammond’s talents will once again be on display. Hammond, who has completed more than 40 portrait busts of Hall of Famers, has transformed the Jason Taylor Foundation logo into a true work of art.

“Jason was great to work with – as most Hall of Famers are. But I just got a sense that he is a real good person with a good heart,” said Hammond. “I really enjoyed talking with him about his foundation and when you talk about working with kids on the artistic side of things with the poetry program, I thought it would be cool to create a piece of art work with the foundation. It is unique and different and therefore deserves a different kind of award.” 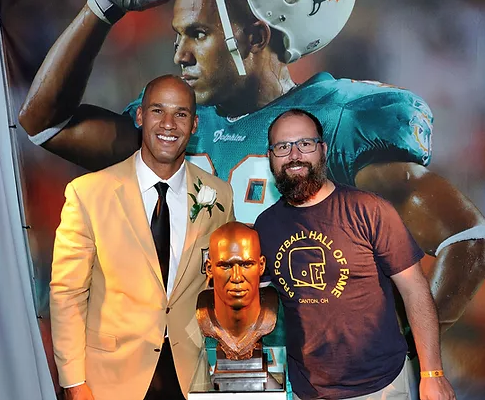 While Hammond was more than happy to share his talents for the cause, he certainly did not expect to be asked.

“There is no precedent for it. I’d never been approached by any of the previous Hall of Famers who I’ve worked with, and neither was my mentor, Blair Buswell, and he’s sculpted more than 100 Hall of Fame busts,” shared Hammond. “This is truly unique. Blair thought this was awesome. He said, ‘I never got to do anything like that!’”

On Saturday, May 14, Taylor will host his second Jason Taylor Community Hall of Fame Dinner Presented by Z Wealth Solutions at the Seminole Hard Rock Hotel & Casino. This year’s class of Community Hall of Fame inductees will include Alonzo Mourning (Celebrity Honoree), Allen Milam (Corporate Honoree) and Taylor Richardson (Youth Honoree). Each of them will go home with a unique bronze cast sculpture to commemorate their outstanding commitment to others.

“Our logo has always meant a great deal to me because the little boy was inspired by my oldest son, Isaiah, who wasn’t even two years old when we started the Foundation,” said Taylor. “To see how Ben has taken an illustration we’ve become so familiar with for nearly 20 years and turned it into this incredible sculpture has been amazing. We feel like we now have an award worthy of the outstanding work each of our honorees does in our community.” 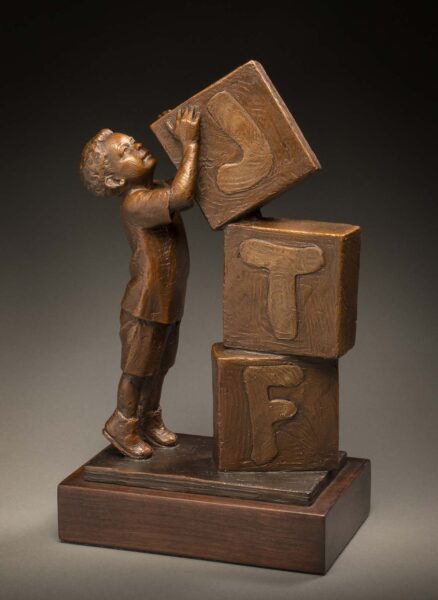 Originally created by South Florida artist, Surge, in 2004, the Jason Taylor Foundation logo features the image of a small child stacking three giant blocks, each adorned with a letter to spell out the Foundation’s “JTF” initials. The imagery is accompanied by a child-like font type and the tagline, “Building A Better Future.”

“It’s different because most of the time my art is coming out of my head. I have something in my mind that I want to do,” explained Hammond. “With this there was already an existing logo. It is a two-dimensional logo and I don’t work in two dimensions. I work in three dimensions. The fun part was taking a two-dimensional image and making it interesting to look at from all angles. That really does create a challenge where I want to be true to the original logo but make it unique so that it is its own piece of artwork.”

Sculpting the Community Hall of Fame award took Hammond somewhere between 40-80 hours of actual work time, roughly the same amount of time he invests in creating a Pro Football Hall of Fame bust. Once the sculpting is completed, a 12-week casting process takes place to cast the clay into bronze. 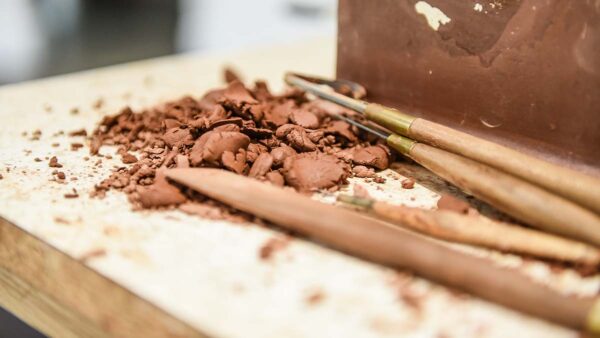 “I want my artwork to uplift and inspire and any time you can find a special connection, that’s gratifying,” Hammond said.  “The logo is Jason’s son and while I didn’t do a perfect portrait, that image not only relates to Jason’s foundation, but to him and his family. Hopefully they can appreciate this for generations.”