#WhatsHappeningWednesday: “The Crossover” by Kwame Alexander

“The Reading Room enhances the academic capacity of students through our support system,” shared Kevin Sawyer, Educational Director and Case Manager for the Jason Taylor Foundation. “We can adjust and adapt our curriculum to best fit the needs of the students.”

This week, eighth grade students at both sites received a special treat as the Jason Taylor Foundation provided each of them their own copy of the award winning young adult’s novel, The Crossover, by Kwame Alexander, to begin their first novel study of the new year.

“The goal is to incentivize and motivate them to create their own personal library,” Sawyer explained.

Written in verse from cover to cover, Alexander’s novel follows two African-American twin brothers and their passion for basketball to explore relevant topics including the stresses of adolescence, sibling rivalry, health awareness and race relations.

Divided into six sections, The Crossover is intentionally comprised of different types of poetry including free verse, haiku, list poems, rap and rhyme. Kwame’s attempt to offer true diversity of verse drives his goal to hook young, reluctant readers into falling in love with a book.

Disguised by an appealingly unorthodox mix of basketball terms and poetic license, Kwame incorporates critical vocabulary terms through twelve poems that are strategically positioned at important points throughout the book.

Reading Room students took turns reading aloud for 90 minutes and were challenged to truly embody the characters they played. With instructors there to provide an energetic example, the students began to let their guards down and enjoy the novel in a greater capacity. With bursts of laughter and an occasional snarl, it was easy to tell that the students were engaged and making a connection between their lives and those of the characters in the novel.

Considered the highest award for children’s literature, The Newbery Medal is named after “The Father of Children’s Literature,” John Newbery, and is awarded annually by the American Literature Association. The Crossover achieved this award in 2015 despite its bleak start. The concept of marrying the subject of sport and poetry was not a popular one and was rejected several times before being published in 2014. Given Jason Taylor’s groundbreaking commitment to establishing the Omari Hardwick bluapple Poetry Network, a program that was incubated in the Reading Room, the JTF clearly recognized how powerful this connection could be for its students.

Thanks to the novel study component of the Reading Room curriculum, eighth grade students who have been attending the program since their sixth grade year have completed anywhere between 15 to 20 books, the majority of which have been a part of the Bluford Series.

“We take great pride in the fact that our students are not only learning critical literacy skills at the Reading Room, but that they are reading entire novels, discussing the stories with their peers, and thirsting for more,” said Seth Levit, Executive Director of the Jason Taylor Foundation. “When you couple that with our commitment to the written and spoken word through bluapple Poetry, it doesn’t take look to see how this book so perfectly complements the efforts of both programs and what we’re trying to accomplish with each.” 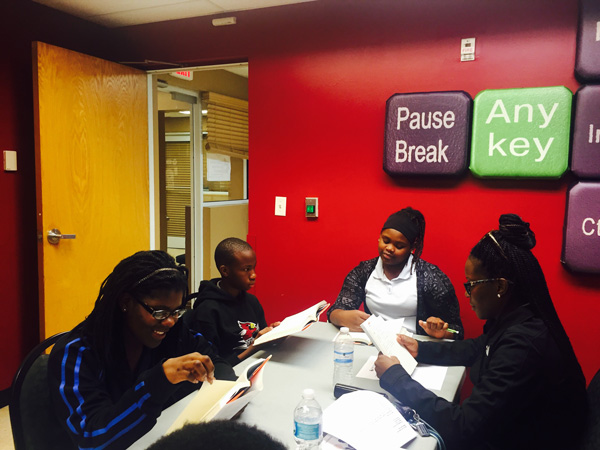 #CoolGearFromTheSchoolYear is 1 month away and we just received an incredible gift. A special donor has committed t… https://t.co/NPp88mexmK

Hard to believe it was 5 years to the day that the bossman @JasonTaylor was enshrined in the @ProFootballHOF! Our g… https://t.co/yIgQHAasV2