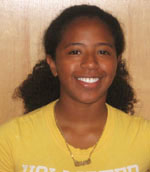 Ivaneza Moliere, a graduate of Booker T. Washington Senior High School, was chosen as the first ever Jason Taylor Scholar back in 2005 and was a part of the first graduating class of Jason Taylor Scholars. During her six years in the program, her wonderful accomplishments in and out of the classroom have proven her to have been the perfect student to have pioneered this program.

While at Booker T. Washington Senior High Ivaneza earned a 3.37 GPA, was a member of the National Honor Society, participated in many extracurricular activities such as varsity basketball and track and received academic excellence awards in both science and math. In addition, she was recently accepted to the University of Florida where she plans on studying to become an attorney.

One of Ivaneza’s teachers at Booker T., Michael Friedman, explained that she has excelled in high school and will continue to excel in college because of her strong will and determination.

“She has a drive to learn,” said Mr. Friedman. “She has the tenacity and belief in herself to succeed.”

Ivaneza has made the Jason Taylor Foundation extremely proud and she explained that now more than ever, she is truly grateful for the opportunity the Jason Taylor Scholars program afforded her.

“When I was younger it didn’t really hit,” said Ivaneza. “When I got older it started to hit me that this really means something.”

Once she understood the program’s value, she was determined to take full advantage of it.

“When I set my mind on something I go for it,” said Ivaneza.

Ivaneza said she feels “stress free” knowing that the program has provided her with a four-year scholarship to UF.  In addition, she explained that if she would not have received this scholarship, the distraction and burden of finding the funds to cover tuition costs would have made focusing on her schoolwork a tremendous challenge.

Ivaneza’s mother went a step further to explain how the scholarship program has “changed the life” of her daughter who has grown up in a rough part of Miami known as Overtown.

“We’ve been through a lot living here and felt education was the only way out for my kids,” said Mrs. Moliere. “I did everything I could to make sure she took advantage of the scholarship.”

The Jason Taylor Foundation could not be more proud to see the growth and success of its first Jason Taylor Scholar as she graduates high school and takes her next step in achieving her goals. Mr. Friedman puts it best when describing this gifted young lady.

“Every once in a while you have a student like her and it makes your career worthwhile,” said Mr. Friedman. “To see that spark in a student is an inspiration. She is going to change the world!”