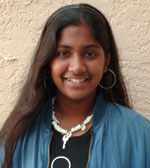 Vilma Sooknanan is the first person in her family to consider going to college. She wants to make her family proud of her and would like to be able to help them financially in the future. She is the oldest of her siblings, consisting of two brothers and one sister. Vilma feels that she is a positive role model to her siblings and hopes that her hard work will encourage them to apply for a Take Stock in Children scholarship.

Vilma is a graduate of South Broward High School, where she earned A’s and B’s. Vilma was in the Marine Magnet program due to her interest and concern for how water pollution affects the ecosystem and how it is harming the environment.

Vilma considers her strengths to be organization and helping her peers academically in class.  She was heavily involved in extracurricular activities at school and was apart of the Shark Club, Ocean Bowl Club and the National Honor Society.  Vilma was also selected to be the chairperson of The Big Blue and You Foundation youth board. Vilmas received numerous awards including the President’s Award, the “Kids of Character Award,” first place in her school science fair, and was on the Principal’s Honor Roll. She also received recognition for her reading achievement on her FCAT’s.