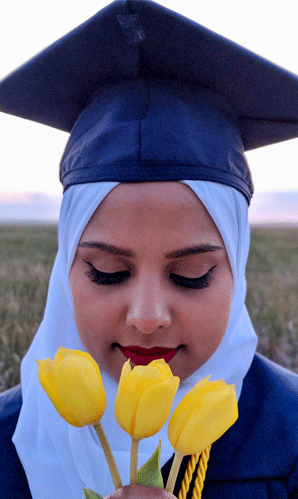 Sharifa Shageer, is a young lady whose hard work, determination and altruism embody exactly the qualities that the Jason Taylor Scholars program looks for in its scholars.

Sharifa Shageer, a 2010 graduate from Atlantic Technical Center High School, was honored at the annual Jason Taylor Gala in spring of 2010 as part of the first ever graduating class of Jason Taylor Scholars. Since her induction into the program in 2006, Sharifa has excelled in the classroom graduating with a 3.69 GPA in the school’s Pharmacy Tech Program and winning many awards and honors, including the Teacher Scholar and Good Neighbor Award, Principal Honor Roll in middle school, and National Junior Honor Society in 2006.

Sharifa is now in her second year at Broward College, making her goal of getting a higher education a reality. Her plans are to receive her Associate’s Degree at BC and then transfer to either Nova Southeastern University or the University of Florida to continue her studies in Pharmacy.

Sharifa said that making her parents proud was her driving force in achieving her goal to go to college, but added that taking away the financial burden that sending a child to college can create motivated her to take advantage of the opportunities the Jason Taylor Scholars program offered.

“I’m really happy because it means a lot to my parents. I saw it [going to college] as a way to pay them back,” she said. “There’s a lot of people that want to go to college but can’t because it’s a financial strain. This [Jason Taylor Scholars program] gives you a chance.”

Sharifa’s mother, Sharmila Shageer, explained that she is extremely proud of her eldest child’s achievement because one of the main reasons their family left their home country of Trinidad and came to the U.S. was so that their children could have a chance to go to college.

“Sharifa having the opportunity we couldn’t have is great! This has been one of the nicest things that have happened to us since we left our country. It’s a dream come true.” stated Mrs. Shageer.

The Jason Taylor Foundation is extremely proud of Sharifa and wishes her nothing but the best in her endeavor to become a pharmacist. We have been honored to have watched Sharifa grow and excel in our program and are excited to see her succeed in the future.