On Monday, November 7, Jason Taylor, the legendary Miami Dolphins defender and 2007 NFL Man of the Year, will gather with his South Florida celebrity friends and community supporters at the Seminole Hard Rock Hotel & Casino’s Hard Rock Live for the 13th annual CHG Healthcare JT’s Ping-Pong Smash Presented by Publix. The original, celebrity-doubles table tennis tournament is now one of the Jason Taylor Foundation’s most popular and anticipated special events, however the Smash that people will enjoy next month has come a long way from its humble beginnings.

After making a tremendous impact on the Holtz Children’s Hospital’s Learning Center as a result of his first ever Celebrity Golf Classic, Taylor established his eponymous non-profit organization in July of 2004. Looking to kick things o
ff in a fresh and innovative way, Taylor tasked his Foundation’s Executive Director, Seth Levit, with complementing his Golf Classic with an event that appealed to everyone. Levit came back with an idea: table tennis.

“I was like, ‘Ping-Pong?’” expressed Taylor. “I thought he was nuts, actually. I never really played Ping-Pong growing up and didn’t see his vision. For some reason, though, I signed off and kind of let him run with it. Looking back on it now, I guess it’s a good thing that I did.”

Levit “ran with it” for sure. He ran to a group of his friends that would support his zany idea, he ran to Carlos Zeller, a local tournament director, to help develop the structure of a table tennis event, and he ran to the area’s brand new entertainment venue, the Seminole Hard Rock Hotel and Casino, in hopes of finding the appropriate home for a larger-than life, celebrity table-tennis event. 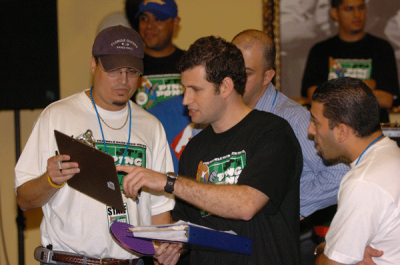 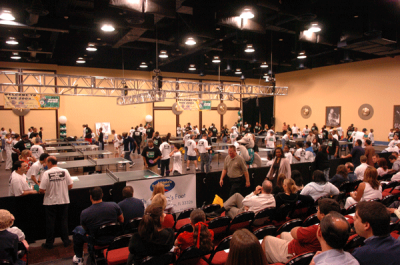 “So many of the people involved today were with us from day one,” Levit explained. “Amazingly, the Hard Rock jumped right on board, thanks to Susan Renneisen, Dave Gold and Cima Georgevich. And my friends, while I think they thought it was a bit of a joke, they thankfully were with me every step of the way. Guys like Sean Todd, Mike Judd, Sergio Quinonez, Vinnie Fiordelisi, Ben Westby and Angel Anglero were instrumental to putting this all together. Without them, there was no way I could have pulled it off.”

But while many of the faces from the first ever Smash were the same, the event was a far cry from the one fans and supporters are familiar with today. For starters, the state of the art Hard Rock Live arena that has been home to JT’s Ping-Pong Smash since 2005 was merely in its blueprint phase. Instead, 25 tables were crammed into a temporary multi-purpose room entitled “The Club.”

“The Club was maybe a quarter of the space we utilize now. Dave Gold and I spent a week measuring tables, drawing up diagrams, estimating the amount of space players would need without running into each other, and just hoping for the best,” recalled Levit. “It was a tight fit, but we got every last one of them in there.”

Another issue was the Hooters Champions Celebration. Today, the restaurant located in the Seminole Paradise throws a private, VIP party for donors and celebs to eat, socialize and watch football following the Smash. Jim Upchurch of Hooters signed off on the support, but there was one problem. No restaurant! The actual building was still under construction, so food was cooked and brought to a nearby location.

“I remember we all went in to what looked like a makeshift ballroom,” said Taylor. “They set out a row of chafing dishes and some cocktail rounds. I didn’t think anything of it at the time, but it sure was a lot smoother once we could use the restaurant the following year!”

And then there were the tables.

“Don’t even get me started on the tables,” bemoans Levit. 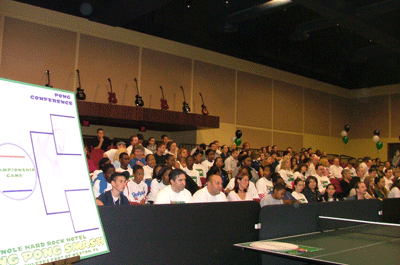 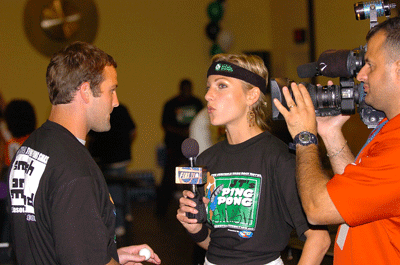 JT’s Ping-Pong Smash is modeled after the NFL’s structure. The tournament features the Ping and the Pong Conference, each of which have four divisions (Ping North, Ping South, etc.). Within each division are six teams, meaning a total of 48 duos compete for bragging rights. To accommodate this many teams, a total of 24 tables are needed. As a brand new Foundation only a few months in existence, Levit sought the most affordable tables he could find.

“Everyone knows I try to minimize our overhead to maximize the funds we raise for the kids we serve. The thought of purchasing 24 Ping-Pong tables in one shot was a little intimidating,” said Levit.

“So I ordered the most inexpensive tables I could find from a sporting goods store and they shipped them to us,” he continued. “And then it hit me. We had to find a place to store and assemble 24 tables! I panicked.”

Levit’s concerns were quickly squashed as Jason Taylor Foundation Board Member, Ralph Stringer, offered a solution. Stringer owned a vacant house as an investment property, and allowed the tables to be delivered and stored in the home. He had no idea what he was in for.

“I just remember Seth asking me if I could help him put a few tables together,” shared Sean Todd, now the Foundation’s Director of Operations. “Next thing I know I’m in the middle of a residential neighborhood. I walked into the house and there was absolutely nothing in it, except 20 something huge cardboard boxes stacked in the center of the living room floor!”

Levit and the crew spent the next week putting the tables together, night after night. They would take breaks by playing on completed tables, with Stringer’s property often looking like a rec center as multiple games took place at the same time. And then it happened.

“We were playing on one table and then heard a loud pop,” Levit shared. “The bracket that mounted the table to the legs broke off one of the tables. By the time we figured out which table it was, we hear another pop, and then another. The tables were literally falling apart. It was devastating given the amount of work we put in, and it was even worse thinking about transporting everything to the Hard Rock.”

Fears became reality as Levit and friends loaded the tables into a moving truck.

“It sounded like we were throwing scrap metal into a pile,” he said. “Not one table went on the truck clean. We finally decided to just get them all packed in as tight as possible and make our way over.”

After surviving the load-in, and sacrificing only one mailbox belonging to Stringer’s neighbor, the truck driven by Sean Todd, made its way to the Hard Rock.

“With every little bump and turn, I could hear them just breaking into pieces back there. It was a helpless feeling and I was dreading Seth’s reaction,” shared Todd. “When we opened the rolling door they nearly fell out in a million pieces.”

With just a few hours before the event would begin, the crew sprung into action. They salvaged what they could of the tables that remained intact and began to put them all back together using whatever was available.

“Hammers, nails, screw guns, caulk…needle and thread,” Levit joked. “Anything and everything. We just needed those tables to survive a few hours.”

They pulled it off! The tab
les were set and to the untrained eye, they appeared to be brand new and ready for action. The first people to see them, however, were not untrained, but actually experts. 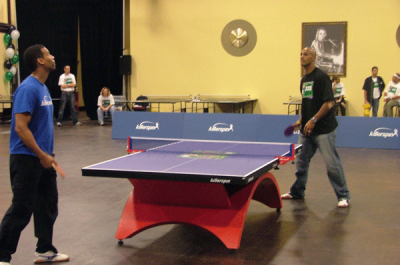 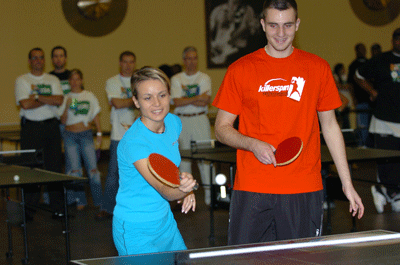 Robert Blackwell, founder of what was then a relatively new table tennis equipment and event company named Killerspin, had flown in from Chicago to help Taylor with his first-year event. Blackwell brought Biba Golic, described as the Anna Kournikova of table tennis, and other Killerspin team members, to hold an exhibition during the Smash to dazzle onlookers.

“I’ll never forget what Robert said to me,” recalled Levit. “He felt the corner of a table and then turned to me and said, ‘These might be the cheapest tables I have ever seen in my entire life. I promise you that you will never have this problem again.’ He kept his promise, too! The next year we used 25 brand new Killerspin tables, and we continue to use their tables, paddles and balls to this day. Robert and Killerspin legitimized our event in that very moment and I simply cannot thank him enough for that.”

Within hours, Taylor’s donors and community friends flooded the Hard Rock, excited for a new adventure, but without really knowing what to expect.

“I’m not the nervous type, but I had no idea what Seth and the guys had in store for us,” said Taylor. “Before you knew it, ping pong balls were flying around and people were having the time of their lives. It was an instant success.” 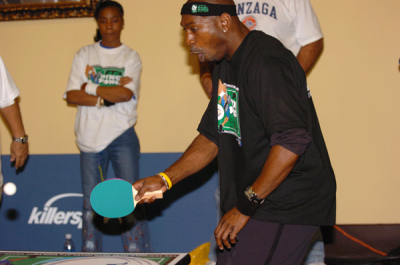 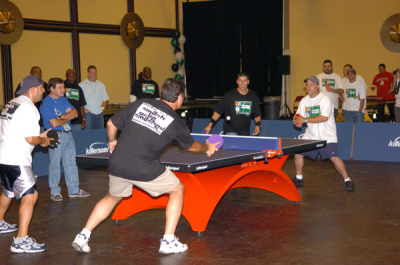 Dolphin greats like Zach Thomas, Sam Madison, Patrick Surtain, Olindo Mare, Oronde Gadsden, Wes Welker, Kim Bokamper and Randy McMichael were joined by the likes of current ESPN broadcaster Lindsay Czarniak, Adam Gaynor of Matchbox 20 and others, all in support of Taylor’s first-year event. Former Dolphins tight end and current radio and television personality, Joe Rose, ultimately came out on top as his team survived Olindo Mare’s team to capture the title. The event truly was everything Levit had hoped it would be and more, and it set the stage for years to come.As JT’s Ping-Pong Smash turns 13, it maintains so much of its original charm, but has grown in many ways as well. Timed rounds, championship belts, the Best Buy Fun Zone, and a kids clinic presented by UPS are all elements that have been added along the way to enhance the overall guest experience. 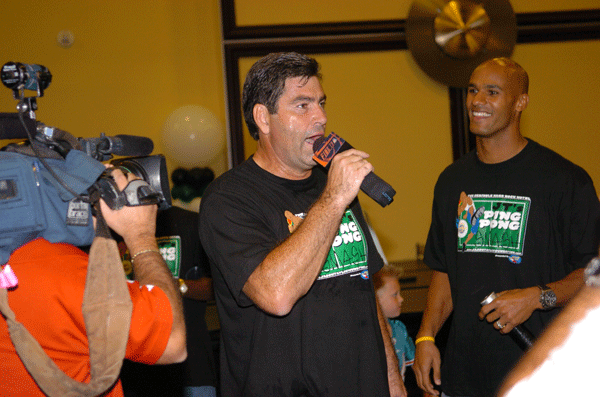 Last year, Taylor added another twist, inviting current Miami Dolphins Pro Bowl Center Mike Pouncey to co-host the Smash, bridging the gap between Dolphins legends of the past and the stars of the current day. The event was billed as “JT vs. Pouncey” creating the buzz and excitement of a heavyweight prizefight.

“Mike is a leader on and off the field, so we are really glad to have him on board,” expressed Taylor. “We have fun and promote it like he and I are advisories, but I want him to feel like this is as much his event as it is mine now. We are raising money for my Foundation and the Team Pouncey Foundation.” 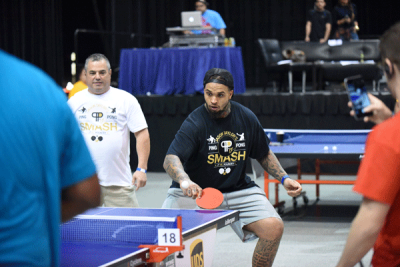 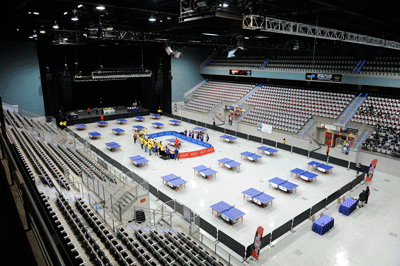 The top two partners supporting this year’s Smash are also a brilliant blend of long-time friends and fresh faces.

“Publix has been a major supporter of everything we do since we opened our doors, and they have been the Presenting Partner of this event for seven or eight years now,” said Taylor. “And we are thrilled to introduce CHG Healthcare as our new Title Partner. CHG has really bought in to the work we do recently. A group of their team members served as judges during our Louder Than A Bomb Florida poetry festival, they did a backpack drive for us, and have just been there at every turn. We get such a great feel from the energy they exude and the culture they have established organizationally that this is perfect fit.”

With a combination of supportive corporate and community partners, generous South Florida personalities, an electric venue and the worlds fastest sport, the CHG Healthcare JT’s Ping-Pong Smash 13 Presented by Publix is destined to be a tremendous success.

Doors open at Hard Rock Live at 5:30 PM on Monday, November 7. Admission for spectators is a $5 donation to the Jason Taylor Foundation. For more information, please visit https://jasontaylorfoundation.com/events/jts-ping-pong-smash/. 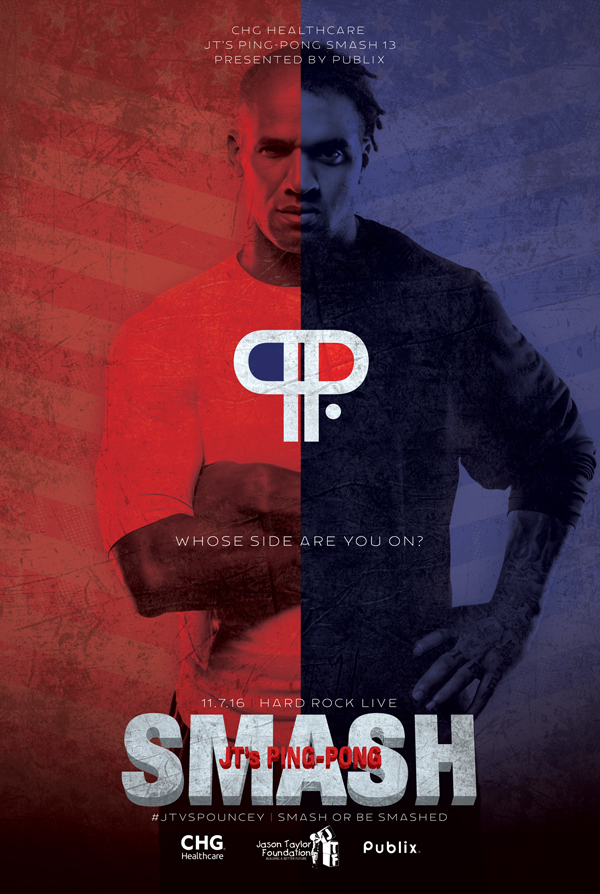 RT @BrianKnowles777: Thank you to the @JTFoundation99 for an opportunity to collaborate in supporting our educators and students. Enjoyed h…