“Writing eases my own suffering…writing is my way of reaffirming my own existence.” –Gao Xingjian

Louder Than A Bomb Florida presented by Nova Southeastern University and UPS, or LTABFLA as we sometimes call it, is back and better than ever. Entering its third year, the poetry competition for high school students across South Florida has grown into a 13-day festival that engages all ages in the community.

The Omari Hardwick bluapple Poetry Network works throughout the year with South Florida high schools to help the youth learn to share and perform their stories through spoken word poetry. LTABFLA showcases the work these students put in and the incredible stories that they have to tell. This year has been no exception.

“I think this year, the kids are raw and they’re completely honest. Some of the content is touchy. I think that they’re allowing their stories to be heavy and allowing it to make people uncomfortable and that’s something that’s commendable,” said Amorette Lormil, LTABFLA veteran and current bluapple Poetry Network staff assistant.

LTABFLA kicked off with a bang when preliminary bouts began on Tuesday, March 28. Across the span of two days, nearly 40 high-schools in the bluapple network competed with individual and group pieces.

With a mic and stage, the students went to work, keeping in mind one of the most important mantras of LTABFLA. While panels of judges do score performances, participants are always reminded, “the point is not the points, the point is the poetry.”

When prelims came to a close, 16 teams and 25 individual poets left to prepare for semifinals just two days away. 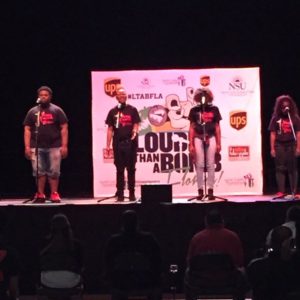 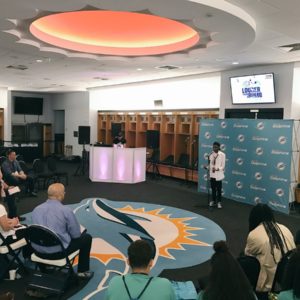 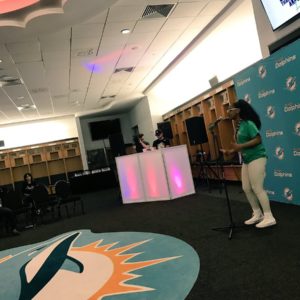 LTABFLA doesn’t only focus on showcasing the work of high school students. The Firecracker and Dynamite Slams, held on Friday, March 31, showcase poetry from students in elementary and middle school. The youngest poet at this bout was only 5 years old, who presented an “Ode to Shopkins.” 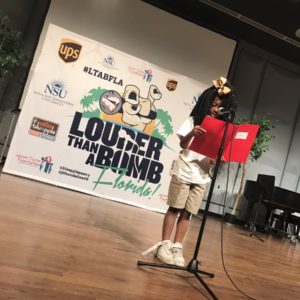 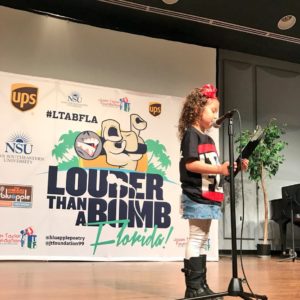 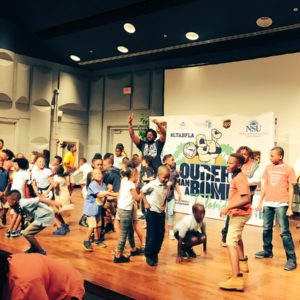 Hosted at the Dillard School for the Performing Arts, we’ve begun to see Dynamite alum grace the LTABFLA main stage as they enter high school.

There was no one fooling around on April 1. LTABFLA Semi Finals consisted of four Olympic-style poetry bouts with four schools competing in each. This year, a semi final round for  “indy” poets was also added, as the top 25 scoring poets of the festival had their work evaluated for the chance to move on to the Indy Finals.

Held in the Rose & Alfred Miniaci Performing Arts Center at Nova Southeastern University, the theater laughed, cried and embraced in one another’s stories. After a long day worth of performance, Boca Raton, Flanagan, Miami Norland, and Miramar each won their respective bouts and will all continue to Finals, along with the twelve indy poets listed below. 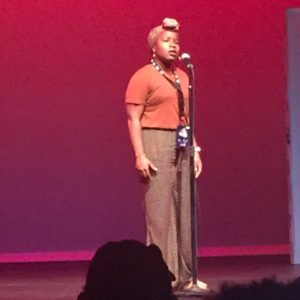 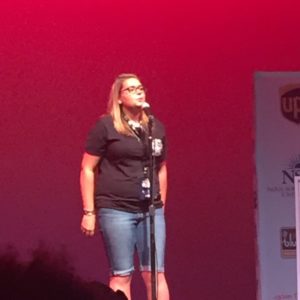 The LTABFLA block party was born out of a partnership with Hoffman’s Chocolates and LIME Fresh Mexican Grill. With their help, an entire section of The Fountains in Plantation became a hub for artistry, music, dancing and, of course, poetry.

The family friendly environment on April 2 was open to the public and LTABFLA poets received free gift bags. With musical performances from The Takers and Leavers and Sheena O. Murray, dance performances from Express the Arts, Fuzion City and the Heroes of Hip Hop, a live art battle between Nate Dee, Carlos Solano and Tee Pop, live art courtesy of SURGE in Hoffman’s, various performances from bluapple poets and the LTABFLA Coaches Slam, it’s safe to say there was never a dull moment.

The Coaches Slam, which gives the teachers of LTABFLA teams the opportunity to showcase their writing always provides a powerful bonding experience between the Coach and his or her team. It is incredible to see the excitement on young poets’ faces as their mentors take stage and they get to cheer them on. This year, Veneisha Clarington of Miramar High School took home the title of Coaches Slam winner, as well as a watch from the Jason Taylor Tower of Strength Collection compliments of Invicta.

On Monday, April 3, the Knight Auditorium at Nova Southeastern University hosted the LTABFLA Town Hall Meeting, an annual event organized by the Jason Taylor Foundation and this year, presented by the Ross Initiative in Sports for Equality (RISE). The event presents an intergenerational panel to discuss varying topics each year. This year the topic of discussion was social justice and activism. 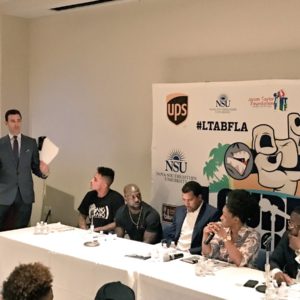 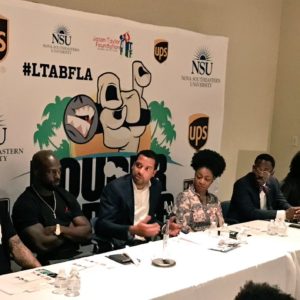 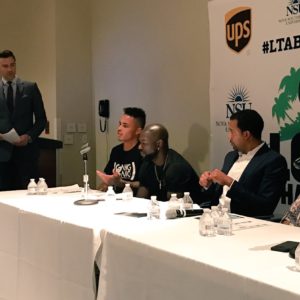 When all is said and done, Louder Than a Bomb Florida is about so much more than a competition.

“The importance of LTAB lies in the poetry, but also vastly beyond the poetry. It’s in the ability and the necessary time these students have to share their stories, to express those things that are often the ugly part of humanity and society,” said Darius Daughtry, director of the bluapple Poetry Network.  “We so desperately need youth and the entire community, to speak out about things that are affecting us on an individual and collective level. So that is why LTAB Florida is not only important but is necessary.”

As the LTABFLA College Slam on Thursday April 6, Ultimate Software Indy Finals on April 7 and StevenDouglas Team Finals on April 8 rapidly approach; the Jason Taylor Foundation encourages those who are interested to learn more about the work that the bluapple Poetry Network does and to hear what the incredibly talented South Florida youth has to say.

To buy tickets and hear the incredible stories these young poets have to tell, go to: https://tickets.completeticketsolutions.com/JTF/Online/default.asp