To find a man’s true character, play golf with him”  -P.G. Wodehouse

The 14 Annual Jason Taylor Celebrity Golf Classic Presented by Community Capital Management and Invicta Watch Group followed the trend of excitement and success seen throughout 2017 for the Jason Taylor Foundation. While the organization continued to work to support all the wonderful programs it strives to bring to the children of the South Florida community everyday, it took the time to honor the man who makes this work possible — the now Hall of Famer, Jason Taylor.

The three-day event that embodies the Golf Classic is one of the foundations largest annual events. This year there was buzz bouncing through the atmosphere that made March 11-13 more than memorable.

You don’t have to be a football expert to know that a solid kickoff can set the mood for an incredible game. Thankfully, Joy Taylor, host of FS1’s “Undisputed”, is no stranger to this concept. Her hosting skills took on a new form at the Seminole Hard Rock Hotel & Casino’s L Bar to set the tone for the rest of the incredible weekend.

Always happy to help her brother and the foundation, Joy welcomed guests for the weekend, lead an a number-pull and raffle and even jumped behind the L Bar all while raising money and recognition for the JTF. Joining Joy for the evening was Jason, of course, along with New England Patriots All-Pro tight end Rob Gronkowski, Hall of Fame defensive end Chris Doleman, Miami Dolphins favorite, O.J. McDuffie, and a host of others.

No amount of rain could dampen the magic that took place at Hard Rock’s Kuro the following night. Aside from an amazing array of the new-style Japanese restaurant’s contemporary artisanal dishes and a star-studded red carpet, there was plenty more to see.

As the live music of Jon Saxx floated through the venue, guests could stop outside to see mermaids and fire dancers by the Hard Rock’s stunning lagoon-style pool. Just a few feet away, sat bluapple poets ready to write personalized haikus for everyone. Throughout the night there were show-stopping performances by bluapple alumni Marnino Toussaint and Savannah Cristina.

Inside, the auction items were on full display. With the items being open to the public for the second year in a row, there was some steep competition for big ticket items such as the autographed Gronkowski helmet, Invicta Watches, hotel getaways and the Jason Taylor Hall of Fame Replica Helmet. The “Hall of 99” told Taylor’s journey of legendary play that landed him the recognition he rightly earned. 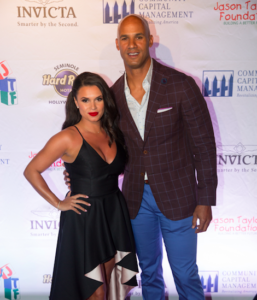 But perhaps the biggest highlight of the night was when Jason and Joy Taylor were able to address the crowd. Thanking all the sponsors, donors and participants, Jason Taylor reminded the crowd the real reason for events like these: to support the youth that need it most. Taylor was able to proudly to present checks to Holtz Children’s Hospital and Take Stock in Children, the charities mainly supported by the event.

On behalf of Holtz, little Deanna helped accept the gift with her family, as the Jason Taylor Foundation’s honorary guest. Deanna was diagnosed with biliary atresia, a rare disease of the liver, at thirteen weeks old and had a liver transplant at 7 months old. Without the work of Holtz Children’s Hospital, she would not be able to share her bright smile and dazzling dance moves with us, today.

Everyone won at Weston Hills

As Sunday night quickly became Monday morning, the golfers got ready to tee off at Weston Hills Country Club. In teams of four, with one celebrity per team, the 14th golf tournament was one to remember. After a full breakfast and hours of play, the team representing the Seminole Tribe of Hollywood, joined by CBS analyst Bart Scott, was victorious.

Of course, the last day of the classic also meant raffling off the 2017 Toyota Corolla donated by JM Family Enterprises and Southeast Toyota Distributors. This year, Ultimate Software won the raffle and was represented by a member of their team and Jai-alai legend, Joey Cornblit. 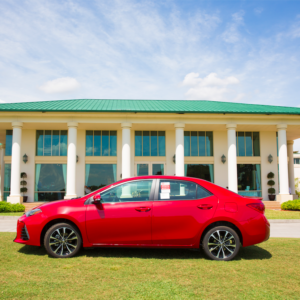 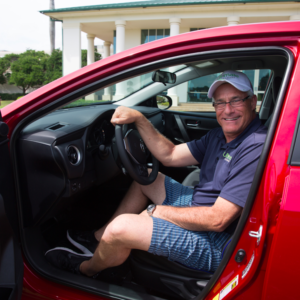 Overall, the 14 Annual Celebrity Golf Classic was a major success. Through three days of fun and fundraising, the foundation will be able to continue the programming that means so much to Jason and the South Florida community.

Build Youth Confidence With The Get Up