Every Tuesday, the Jason Taylor Foundation dedicates the day to spotlighting one of our partners, volunteers, or celebrity friends that have supported our tireless efforts toward building a brighter future for the youth of the South Florida community.

Over the last several years our friends at Moroch Partners have helped the Jason Taylor Foundation with our “Big Screens – Big Dreams” program. The “Big Screens – Big Dreams” program was created by Jason Taylor to inspire and motivate young individuals in South Florida through feature films. The program recognizes the tremendous impact that movies have on youth today and uses positive, uplifting stories to inspire them.

Recently, Moroch Partners reached out to the Jason Taylor Foundation with a unique opportunity and donated an advance ANT-MAN Blu-ray Combo Pack. You have the opportunity to win this version of ANT-MAN via social media by channeling your inner superhero and telling us your superhero name using the hashtag #BigScreensBigDreams and tagging @Ant-Man or @marvel! A winner will be announced tomorrow, Wednesday, January 27th at noon. 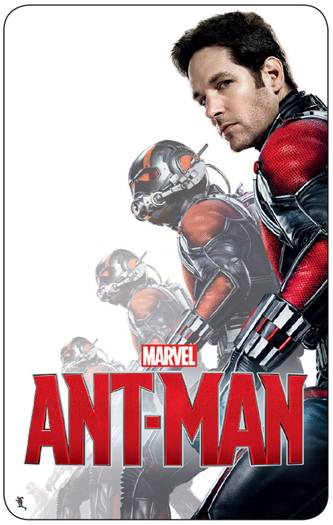 With blockbusters like the X-Men series, The Avengers, Guardians of the Galaxy, Thor, and Captain America, the Marvel Universe has ruled in the box office and in the hearts of the casual and hardcore comic book fans for the past couple of decades. With Ant-Man, Marvel decided to see how a lesser-known character would fare with filmgoers, but didn’t stray too far from what has worked in the past.

Though it follows many of the predictable Marvel tropes that the superhero action movies are known for, Ant-Man is a better than expected adventure that doubles as a different kind of hero story for avid Marvel fans and a delight for families everywhere.

The film follows the capers of Scott Lang and his shrinking ant suit, the product of the fantastic technological advances of the Marvel universe. Forced out of his own company by former protégé Darren Cross, Dr. Hank Pym (Michael Douglas), a disgraced scientist, recruits the talents of Scott Lang (Paul Rudd), a master thief just released from prison. Lang becomes Ant-Man, trained by Pym and his daughter (Evangeline Lilly, in a fantastic portrayal of the Wasp). Lang is armed with a suit that allows him to shrink in size, possess superhuman strength, and control an army of ants. The miniature hero must use his new skills to prevent Darren Cross (Corey Stoll), also known as Yellowjacket, from perfecting the same technology and using it as a weapon for evil.

As Ant-Man fights the evil regime, he maintains his upbeat, quirky sense of humor- highlighted by an endless barrage of witty one-liners. Rudd manages to make the audience root for the unconventional hero as he also struggles with his family issues, love, and his life choices. Following cameos from other Marvel characters (a vibrant fight scene between Ant-Man and the Falcon, leader of the Avengers) and references to the expansive Marvel universe, the film is wonderfully breezy, hilarious, and generally fun. It lacks the great background story of more well-known Marvel franchises, but its combination of humor and distinctive performances stand up well on its own.

Rudd’s Ant Man is refreshingly charming, and the medley of talented actors mesh well – another strength of this film, as the characters remind us that it’s not just the incredible action scenes but the crisp dialogue and comedic timing that keep us all Marvel fans at heart.

Ultimately, Ant-Man is an entertaining heist romp that functions well as a comedy while maintaining the superhero themes of perseverance, teamwork, and redemption without weighing down the lighthearted film. Ant-Man is less an Avenger, and more an ordinary guy trying to make himself and his family proud. This relatable character gives the film more heart than most Marvel movies and makes our shrinking protagonist a big-screen hero.