Louder Than A Bomb Florida 2017 Recap

If you missed the last half of what turned out to be an incredible competition, here’s a recap of the final days of Louder Than a Bomb Florida 2017. You can also see what happened during the first half by clicking here.

Participants, many of whom were bluapple Poetry alum, provided an amazing night of poetry within the Rick Case Arena at the Don Taft University Center in Nova Southeastern University. Ultimately, Barry University, perhaps better known by their team name the Florida Freedom Writers, became the third annual LTABFLA winners of the College Slam. 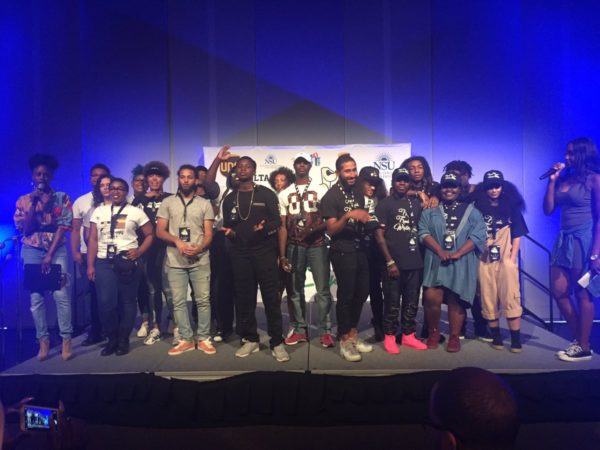 From prelims, to semis and everything in between, bluapple supplies a wide variety of styles and talent for the Indy competition as more than 350 individual poems are performed. On April 7, LTABFLA returned to the Rick Case Arena to watch the top twelve scoring individual poets compete during the Ultimate Software Indy Finals.

And while three poets claimed their prizes, all twelve of the amazing young artists wowed the crowed the entire evening. No audience member was more impressed than bluapple namesake, Omari Hardwick, who stepped off the set of his hit TV series Power to support the poets. 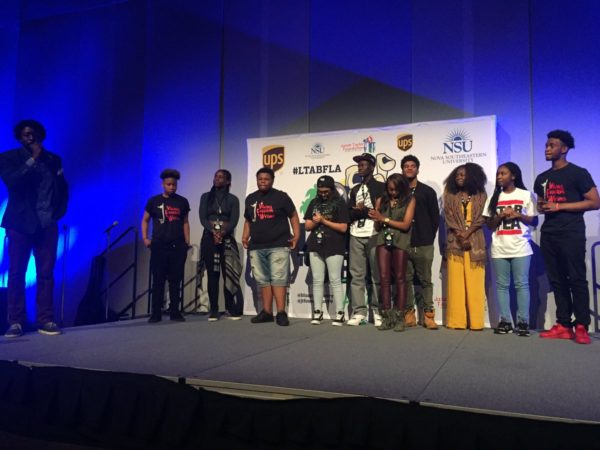 The last night of Louder Than A Bomb Florida Presented by Nova Southeastern University and UPS went out with a bang. On April 8, the Epstein Center for the Arts at NSU became a hub for raw emotions, story telling and connections between individuals of all ages, which was amplified as LTABFLA media partner, NBC-6, livestreamed the event on its website.

The night was destined to be special after encouraging words from Jason Taylor and Omari Hardwick, and a masterful original poem read by Darius Daughtry, Director of bluapple Poetry Programs. Throughout the evening, the crowd of more than 400 guests was also treated to performances by local musical artist Alexander Star and internationally renowned poet, Sierra Demulder, who also served as one of five celebrity judges for the evening. The judges panel also included Miami Dolphins defensive back, Michael Thomas, Hits 97.3 radio personality, Kimmy Bell, School Board of Broward County Director of Equity and Attainment, David Watkins, and NSU Career Advisor and former Jason Taylor Foundation Director of Operations, Jackie Pires. 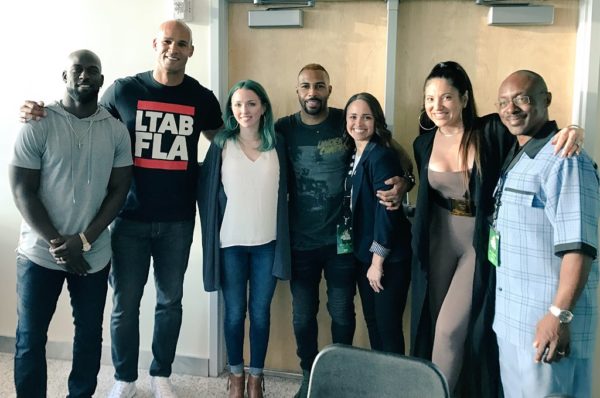 The buzz was certainly in the air, but the true stars of the evening, as expected, were the poets. After 13 days of preliminary bouts and semi-finals, four teams were left standing: Boca Raton Community High School, Flanagan High School, Miami Norland Senior High School and Mirarmar High School. Round after round, the students brought intense and moving performances to the stage, bravely representing their teams, their schools and their communities. Nothing was held back.

In another stunningly close bout, Miami Norland, or the Viking Freedom Writers as they like to be known, came out victorious as the third annual Louder Than a Bomb Florida Champions, earning the opportunity to travel to Chicago this July to participate in the Young Chicago Authors’ spectacular “Write to the City” summer camp for poets and writers. The placing of the other finalists was Boca, Miramar and Flanagan.

As the mics are packed away and ideas for next year’s competition begin to bloom, we know that the voices of these students, no matter where they place, are sewn together with the truth of their own lives. During a time that seems to thrive on uncertainty, there is a strong need for individuals and communities to understand one another and come together. For centuries, societies have done that through the art of telling stories, which we have the privilege of watching with every Louder than a Bomb Florida, we hope to help these young, powerful poets keep telling those stories.

“Teach your children poetry; it opens the mind, lends grace to wisdom and makes the heroic virtues hereditary”- Walter Scott

Build Youth Confidence With The Get Up

It’s almost time! If you’re HS #poetry team has NOT registered yet, time to do so! If you want to volunteer or judg… https://t.co/KxXeOu8835